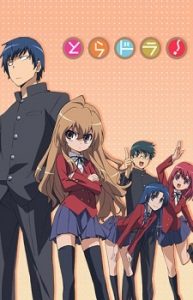 Toradora is a fine anime series about high school life. No the ordinary sort of high school life, but when is high school in anime ever ordinary? Toradora closely follows the life of the two main characters Taiga Aisaka and Ryuji Takasu who happen to be classmates. Also bundled in with the two are their friends Minori Kushieda, Yusaku Kitamura and Ami Kawashima.

The series starts off revealing that Taiga is crushing on Yusaku and Ryuji is crushing on Minori. It so happens that Ryuji is a close friend of Yusaku and Taiga is a close friend of Minori. After getting into some trouble, Ryuji and Taiga agree to help each other reach their love interests. The series follows their life as each try to get the other going with his/her crush but it seems that Ryuji is helping Taiga much more than she is helping him.

After a while, we are introduced to Ami, a childhood friend of Yusaku and the group of four becomes a group of five. At first, Ami comes off as a cold and heartless person with no regard for the feelings of those around her. Also, it is revealed that she puts on a mature face because everybody thinks of her as a mature adult even though she is the same age.

As the story progresses, we see that Ami is starting to develop feelings for Ryuji. She gives it off on multiple occasions but no one around her picks it up. Eventually though, she decides not to interfere with Ryuji’s life and decides not to tell anyone about her feelings.

In the beginning, it seems like Minori is not at all interested in Ryuji. Nearing the end of the series however, it is revealed that Minori does really love Ryuji but is keeping her distance because Taiga needs Ryuji far more than her. Also, at one point, she reveals her feelings for Ryuji, shouting it while running through the school.

Finally, Ruiji and Taiga come to terms with their feelings for one another and almost confesses it but gets interrupted. They decide to run away and Ami, Yusaku and Minori helps them to run away. They go to Ruiji’s grandparent’s house where they meet Ryuji’s mother and come back to their home. At this point, Taiga chooses to leave Ryuji behind to sort out some family problems. The series ends on the note that Taiga also switches school.

If one were to stop watching at this point, it would seem kind of odd and sad that Taiga chose to leave Ryuji. But, at the end of the credits, we see that the two of them are reunited at their graduation day and Ryuji finally gets to confess to Taiga. The series finally ends at this point.

It would seem that the two got reunited and carried forward their plan of marrying. But it’s left to the imagination of the viewer. I certainly like to imagine that they got married and lived a happy life.

Toradora comes to a full closure at the end so I doubt there being a second season. I do however wish that there be an OVA clarifying the events after their reunion. But until then, I’ll keep imagining that they got reunited and eventually married.

Toradora is a fine piece of art and I recommend everyone to watch it. It’s also a good watch for those new to the world of anime and those with a thing for drama. I wouldn’t say that it’s all drama and no comedy but the drama portion sure is weaved wonderfully into it.