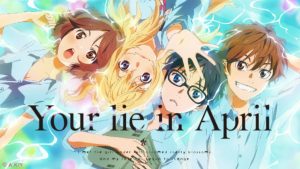 Your Lie in April is an anime series centered around an aspiring pianist, Kosei Arima, who can no longer play the piano due to a very unique hearing disability, he cannot hear his own playing. Throughout the course of the series, Arima meets and befriends an aspiring violinist, Kaori Miyazono, and learns to play the piano despite his disability. We come to learn about Arima’s childhood, how he inspired several people into music with his piano at a very early age. At-least 3 different people were inspired into music by his playing the piano. We learn that in the beginning, his playing was “magical” and moved everyone. But as he continued to learn under the tutorship of his mother, Arima lost his magic as his mother forced him to play only what is written in the sheet and play it exactly as it was written.

Arima’s mother was suffering from some fatal disease and dies while Arima is very young. Soon after that, he stops playing the piano as he discovers he cannot hear his own playing. Using his disability as an excuse, Arima managed to stay away from the piano although he can never get rid of it completely. In the course of time, Arima becomes friends with Kaori and attends a violin competition she takes part in. He is inspired by her playing and begins to change slowly. Shortly afterwards, Kaori forces Arima to play with her at the second stage of the competition. Although it goes horribly wrong half way through, they manage to put on a spectacular performance.

Kaori manages to force Arima to enter a piano competition, thereby restarting his path as a pianist. At the competition, we are introduced to two of Arima’s rivals, Emi Igawa and Takeshi Aiza, both amazing pianists in their own right. Although Arima is unable to qualify the prelims of the competition, he finds a reason to play the piano during his performance. Arima decides to play for the sake of Kaori and his “magic” starts to return to him. It is later revealed that Emi was inspired to be a pianist by Arima when he played in a recital at a very young age.

After his attempt at the competition, he enters another piano competition where he faces off against his rivals Emi and Takeshi. It is revealed that Kaori suffers from a fatal disease and is hospitalized permanently soon after Arima’s first competition. During the time Kaori is hospitalized, Arima begins to teach a girl piano, it is later revealed that she is the younger sister of Takeshi. During the competition, Arima, Emi and Takeshi becomes very good friends despite their rivalry and helps one another become better.

Nearing the end of the series, Kaori passes away and takes with her Arima’s reason to play. It’s not revealed whether she dies before or after the competition but my guess is the she died before, which is why Arima plays such a sad and lonely song. Before she dies, she leaves a letter for Arima which explains a lot of things that were left unexplained.

Throughout the course of the series, we learn that Tsubaki, Arima’s neighbor and childhood friend, is in love with him. Although everyone else knows about it, the only two people who don’t know it are Arima and Tsubaki themselves. Although throughout the series it was said the Kaori likes Watari, the biggest surprise was yet to be revealed.

The true meaning of the anime’s title “Your Lie in April” was revealed in Kaori’s letter to Arima after she dies. In the letter, Kaori reveals that she was in love with Arima and not Watari. She lied to get close to Arima because she knew that Tsubaki was in love with Arima and also that she does not have much time on her hands. It is also revealed that she was a pianist at first but switched to a violin when she heard Arima play at the recital when they were young. In this way, she could play a duet with Arima on the piano and her on the violin.

At the end of the series, we see Tsubaki confess her love to Arima directly; she did sort of confess her love long before but not directly. It is clear from Arma’s reaction that he also feels the same for her. The series concludes after they promise to be together like they were covered in superglue.

In all, I’d say this is a fantastic series for those who love a bit of drama with comedy. I’d recommend watching Your Lie in April to hardcore fans of anime and those starting out on the road of anime. I personally loved how the series kept us in the dark about the “lie” all the way till the very end.

Your Lie in April is a series with full closure and I do not expect there to be a second season. I would however like to see a few OVAs covering some side stories about the characters or the series in general. I will conclude by review here, and, as always, every anime is great in their own right.