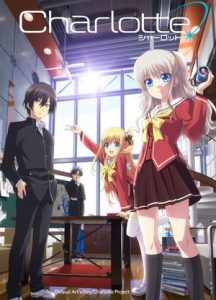 Charlotte is a light hearted anime series and a good watch for any time. Nothing bad (except for one permanent death) happens in the series and it won’t too much strain on your tender little heart. I would recommend it for anyone starting out on the anime world. But it’s just as good for seasoned anime fans as well.

Charlotte depicts the story of Yuu Otosaka in a world where adolescent teens have special abilities. Yuu is a part of a group that locates others with abilities and protects them from scientists wanting to experiment on them. In the beginning, it is revealed that Yuu has the power to take over another person’s body for 5 seconds; an ability that is seemingly useless, is revealed to be the most powerful ability as taking over an ability wielder results in Yuu gaining the subject’s ability.

The story progresses fairly similarly in the beginning episodes. The group will go about locating new ability wielders and stop them from using their ability in whichever way they deem necessary. In most cases, the ability is taken away by Yuu when he takes over their body for one reason or another. Some episodes into the series, we see Yuu’s younger sister Ayumi die when her ability becomes unstable. However, a few episodes later, Yuu travels back to the past and saves his sister from that fate. If the effects were permanent, the death of Ayumi could be seen as a tragic event. We see Yuu get his memory, of a life that he lived in another timeline, back (which should be impossible) and find out about his real power (plundering other’s ability). He then meets his older brother, who has time leap and uses his ability to save his sister.

We experience some heartbreaking in the last episode when Yuu, in his mission to save every ability wielder, forgets about everyone. The effect is compounded when he is unable to even recognize Nao Tomori. But the fact that he returned unharmed (other than his memory loss) and that he had the gift Tomori gave him makes us ever so happy. In the end, we see that the whole group is reunited and enjoying the return of Yuu.

In short, Charlotte has a happy story with full closure and we can rest our hearts and minds that everything turned out just fine. Yuu and Tomori is back together, and according to their promise, they are now a couple. I would also imagine that Yusa and Takajou will form a cute couple some time in the future. And, since there are no more ability wielders left, Yuu, Ayumi and their brother Shunsuke would be able to live together as a family once again.

I would like to see an OVA of their lives after the events of the series. But, even if that does not happen, I can have peace of mind that the story has ended in all right and everyone is living a happy life.

Image is taken from the Wikipedia page of Charlotte.