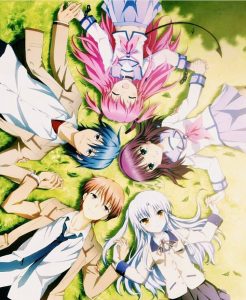 Angel Beats is an anime that is a must watch for any anime lover out there. It takes one on a very bumpy feels journey through it’s 13 episodes and leaves the viewer in an extremely heartbroken state. Do not watch if you recently had a breakup or anything like that. I don’t judge between different anime and I believe that each and every one is extremely well made and amazing in it’s own right, but I have to say, I really liked Angel Beats. This review is a few years late but meh, whatever.

Angel Beats starts off pretty abruptly. Otonashi wakes up with an amnesia and he finds Yurippe who asks him to join her battlefront. The viewer, at this point, will scratch their heads and try to make sense of what’s going on, just like Otonashi does. Also, a lot of background information is missing in the first few episodes but one gets a general idea pretty soon. The first 2 episodes are fairly normal, just like any other anime. We get an idea of some of the character’s past. Yurippe’s past is the most disturbing of all the characters whose past has been revealed in the anime. By episode 3, the big feels guns are pulled out with Iwasawa disappearing at the end of the episode. Although we were not given enough time to get attached to Iwasawa up to the extent where we would feel really bad though.

Soon after the disappearance of Iwasawa, we are introduces to Yui, actually, at the very beginning of episode 4. Her first impression was not as effective as one might expect but, time has it’s way of changing things. I was happy to see Kanade being accepted as a friend by the battlefront despite the past differences.

Soon after Otonashi gets his memories back, he vows to put everyone at ease with their past. At first, this doesn’t seem like a very bad idea. They were all stuck there because they weren’t at ease with their past. What’s the harm in helping everyone attain peace with their past one would ask. The problem becomes apparent once Otonashi actually manages to complete Yui’s dreams and put her to rest. We experience the first major heartbreak in the series with Yui disappearing from the world. By this time, we had more than enough time to form a strong attachment with Yui and the circumstances of her disappearance combined with the song at the end of episode 10 is enough to put anyone into tears. FUCK YOU FEELS. I’M A MAN. A MAAANNN I TELL YOU.

From this point, the series becomes somewhat fast paced and we see some combat with “ghosts”. Nothing very special happens from this point till the end of the series. The ending puts us all in an extremely high speed feels train. The feels go from being very happy for the 5 remaining members to extremely heartbroken in about 30 seconds. At the end of the series, after Yurippe, Hinata and Neoi have left, we see Otonashi confess his feelings for Kanade. (Note: We are still feeling somewhat happy at this point despite seeing 3 members disappear.) At this point, Kanade reveals that she’s here to say thank you to Otonashi for giving her a heart and allowing her to live longer. This is where we board the mother of all feels train and witness Kanade reveal her feelings for Otonashi and then disappear, leaving behind a crying Otonashi. (Note: We are extremely heartbroken at this point). The series seemingly ends with Otonashi staying behind. It’s not until after the credits and the song (don’t listen to the ending song of the last episode if you don’t have a box of tissue nearby. And, again, I AM A MAN.) It’s at the very end that we find out that Otonashi did pass on at some point after the events of the episode. This is indicated by him disappearing from the group the last and after some delay. Also, after the credits end, we see a reincarnated Kanade and Otonashi walk past each other and Otonashi seem to recognize (for lack of a better word) Kanade by the song she’s humming (“My Song”, Iwasawa’s last song).

The ending of Angel Beats was particularly sad, however, we do get some comfort from the fact that all of them passed on and was at ease with their past and that Otonashi and Kanade were given a chance to live a life together. I would also like to think that Hinata and Yui were also given that chance and all the members of the battlefront were reincarnated and living a happy life. But, since the main ending was pretty heartbreaking, it’s difficult not to feel sad when you think about it.

Angel Beats is a series with full closure and I don’t think there will be a second season that will continue the story. I would like to see some OVA or movie that takes place between episodes 12 and 13. We never got to find out the life stories of the other core members of the battlefront and how they passed on. This is something I would like seeing developed in the near future. This is something I’m waiting with great anticipation for.

Sometimes I will open up a few episodes to watch, particularly episode 5. But I don’t think I can re-watch the entire series any more, even though I’M A MAN.

Hope you all have a great day, and a box of tissue if you plan on watching this amazing series. Also, click here to go to my Angel Beats playlist on YouTube.